Angels have soared through Western culture and consciousness from Biblical to contemporary times. But what do we really know about these celestial beings? Where do they come from, what are they made of, how do they communicate and perceive? The celebrated essayist Eliot Weinberger has mined and deconstructed, resurrected and distilled centuries of theology into an awe-inspiring exploration of the heavenly host.
From a litany of angelic voices, Weinberger’s lyrical meditation then turns to the earthly counterparts, the saints, their lives retold in a series of vibrant and playful capsule biographies, followed by a glimpse of the afterlife.
Threaded throughout Angels & Saints are the glorious illuminated grid poems by the eighteenth-century Benedictine monk Hrabanus Maurus. These astonishingly complex, proto-“concrete” poems are untangled in a lucid afterword by the medieval scholar and historian Mary Wellesley. 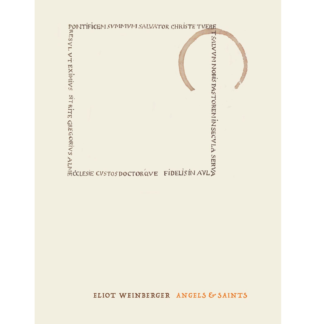