The Evils of Revolution

Written at a time when most of Europe supported the French Revolution, Edmund Burke’s prescient and, at the time, controversial denunciation of its mob rule predicted the Terror, began the modern conservative tradition and still serves as a warning to those who seek to reshape societies through violence.

Throughout history, some books have changed the world. They have transformed the way we see ourselves – and each other. They have inspired debate, dissent, war and revolution. They have enlightened, outraged, provoked and comforted. They have enriched lives – and destroyed them. Now Penguin brings you the works of the great thinkers, pioneers, radicals and visionaries whose ideas shook civilization and helped make us who we are. 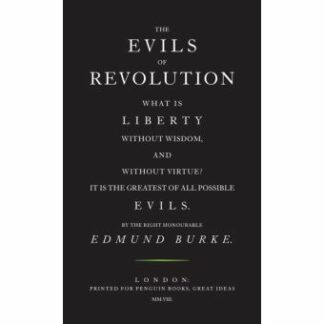 Está a visualizar: The Evils of Revolution 9.00 €
Adicionar